Good news: I got my computer back from the repair shop!  Bad news: it has to go back tomorrow.  Since I have it for one day, though, I wanted to write something for you all.  Today, I wanted to write about the fashion industry, because despite being in the headlines more for severely damaging behavior, it’s still seen as a glamorous profession.  However, recent news has pushed that one temporarily to the back burner.  Apparently, we still need to talk about rape culture.

“But Nerd Girl,” you say, “you talked about rape culture in your very first post!  You brought it up again in your second post.  Why are you still writing about it?”  Well, faithful hypothetical reader, because apparently it still needs talking about.  In Michigan, a principal told a victim not to report her rape because it could ruin her rapist’s chances of getting to play on a D1 team in college.  She listened.  Two weeks later, he assaulted another girl.  What a surprise.

Hey, remember Reno Saccocia, the Steubenville coach who told rapist Trent Mays that he’d cover up the rape for him and that “shit ain’t gonna happen?”  Well, he just got a two year contract extension.  Well done, Steubenville.  Way to send a message about facilitating rape.  I’m shocked they didn’t give him a raise and a medal.  To do that, though, they’d have to be at UNC-Chapel Hill where Landen Gambill was threatened with expulsion from school for going public with the fact that she was raped.  She didn’t name her accuser, but she is still being brought up on honor code violations for “harassing and intimidation” of her unnamed rapist. 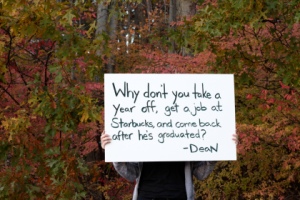 For those keeping score for Team Rape, Chapel Hill is the same school whose administrator told rape survivor Annie Clark that “Rape is like a football game, Annie. If you look back on the game, and you’re the quarterback and you’re in charge, is there anything that you would have done differently in that situation?”  Rape is football, and the victim is the quarterback in charge.  That is possibly the most insulting, demeaning message that a rape survivor can hear.  For the most part, they are already plagued with doubt and thought of what they could have done differently, what mistakes they made, how they could have avoided the situation.  For an administrator to basically tell a victim that they made the mistake and let things get out of hand is revolting.

Occidental and Swarthmore are two more colleges that have come out on Team Rape: College Edition, joining Amherst, UNC-Chapel Hill, Dartmouth, Wesleyan (home of “The Rape Factory” Beta Theta Pi), and Yale (land of “No Means Yes!  Yes Means Anal!”)  Swarthmore assault survivor Kenda Woolfson stated that she was discouraged from reporting her rape by the dean.  Carly Mee, a senior at Occidental said, “When I told an administrator that I did not feel safe, I was told that I had nothing to worry about, that she had met with my rapist, and that he didn’t seem like the type of person who would do something like that.”

Dartmouth students had a protest last week against the administration’s side-stepping of sexual assault, as well as instances of homophobia.  Unfortunately, the student protestors were threatened with rape and death by fellow students on BoredatBaker.com, an open thread site which has since been taken down.  In response, the administration finally decided it was time to do something and followed in Oberlin’s all too recent footsteps by cancelling classes and offering “alternative programming” that teaches respect.  Unlike the backlash faced by Oberlin’s day of class cancellation, the media response to Dartmouth has been neutral to positive.

Some of you may wonder why I have yet to mention Dean Saxton who became famous this week for carrying a sign around University of Arizona saying “You Deserve Rape” at a Take Back the Night protest.  I didn’t bring him up until now, because fuck that guy.  Also, this fun little snippet of 4-chan (shown left) was brought to my attention.  I figured I’d include it here, because fuck those guys, too.

On a more positive note, since colleges seem more interested in keeping their donations high and their rape reporting low, survivors have taken matters into their own hands.  Know Your IX is an activist collective created by rape survivors and victim advocates from many of the aforementioned colleges.  Their goal is to educate young women on Title IX before they start college so they are less likely to be steamrolled by the administration in case of an assault.  They are currently accepting donations to get the project off the ground.

It’s time for America to wake up.  Victims are not responsible for their rapes.  How good of an athlete some is has nothing to do with whether or not they are a rapist.  Back when sexual assault was rarely reported, we shunned those convicted of it and it destroyed their careers (see: Ike Turner and Marv Albert).  Now, Chris Brown is still at the top of the charts, Kobe is still playing basketball, and America still mourns the jail time of Trent Mays and Ma’lik Richmond.  We have a very long way to go.